This is the fifth of our My First Job blog series, where we ask Sirenumates, partners, and customers to reminisce about their first paying job. For more information, see our introduction to the series here. 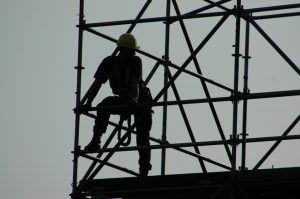 When I finished high school, I started to look for a job. I was quickly hired by a little company in the construction industry. Being the low man on the totem pole in construction is a really physically demanding job. I had to work 12 hours in a row with little breaks every day, and some of the tasks were hard: breaking walls, clearing breaks, drilling holes, digging the ground, etc.

I feel that I learnt a lot from my first job. My boss was putting me down all the time for poor performance and that made me feel completely unengaged. One day, after a long time bearing with this type of behaviour, I decided to quit. I just put down my tools and left. I was very discouraged and felt like a failure. That’s how my boss had made me feel about my role in the team.

However my boss called me and begged me to return! I decided to give in, since he had apologised, but the truth is that he didn’t change his manner, and even after what had happened, he kept putting me down – but not as much. I figured that he didn’t want to lose me, because training a new worker would have been harder than keeping me. I couldn’t be so bad after all!

After a while I left in order to continue my studies, but 12 years later, when I was planning my wedding, I needed help to put together the lights and such things. I called my ex-boss, who volunteered to do all the work free of charge – as my wedding present. He said he was very grateful for I was the best worker he ever had.
I learnt something important at my first job; while people’s feedback is important, action speaks louder than words. But his words later in life sure did mean a lot to me.

About the Author: Benjamin Rubin

Benjamin Rubin founded Sirenum in 2013 based on a decade of staff management experience. Benjamin was previously the head of the political wing of Green Course, the largest environmental volunteer organization in Israel. Previous to this, he was one of the founding members and leaders of Media Central, a PR agency also based in Israel. Benjamin is a trained molecular biologist with a master’s degree from Hebrew University and a bachelor’s degree from Ben Gurion University. Benjamin was born and raised in Israel, but now resides in North London with his wife and four children. A native Hebrew speaker, Benjamin also speaks French and Spanish, plus a touch of Arabic.