What A Week! Recapping a Whirlwind Few Days for the Sirenum Team

What A Week! Recapping a Whirlwind Few Days for the Sirenum Team

Every year around this time, Salesforce comes to London for its World Tour, a remarkable gathering of thousands of Salesforce customers, partners, media, and more. In London, unlike most other cities with World Tours, the day before Salesforce also hosts the Partner Forum, which brings together players from the Salesforce partner ecosystem from across Europe and even further afield for a day of talks, networking, and good food. Now because the Sirenum team is so widely dispersed, and we’re always looking for pragmatic ways to get the team together, three years ago we started inviting the remote members of the team to London for the week of the World Tour. In so doing, we could accomplish multiple key goals:

What’s been particularly rewarding about this plan is the impact of the first point. Remote workers often struggle to relate to the “core team,” let alone appreciate something the size and impact of the Salesforce ecosystem, nor the role it plays in our collective success. But spending the day with 10,000+ people from hundreds of companies in that ecosystem can change that pretty quickly. The energy and sense of community are remarkably palpable. It’s a big reason why we love being a Salesforce ISV Partner.

But it’s the second and third bullet points that took centre stage the first part of the week. With only about a dozen people local during a regular week–and many of them regularly working at a client, visiting prospects, or working from home–we rarely have more than 7-8 people in the office on a typical day. But the influx of out-of-towners during a World Tour week dramatically shifts the dynamic in our office. Team lunches, after-works drinks, and even a visit to an improvisational comedy theater. And the piece de resistance was an evening out for the whole team on Wednesday at Bounce, a social ping pong club in Central London, built on the same spot where the sport was invented over 115 years ago. 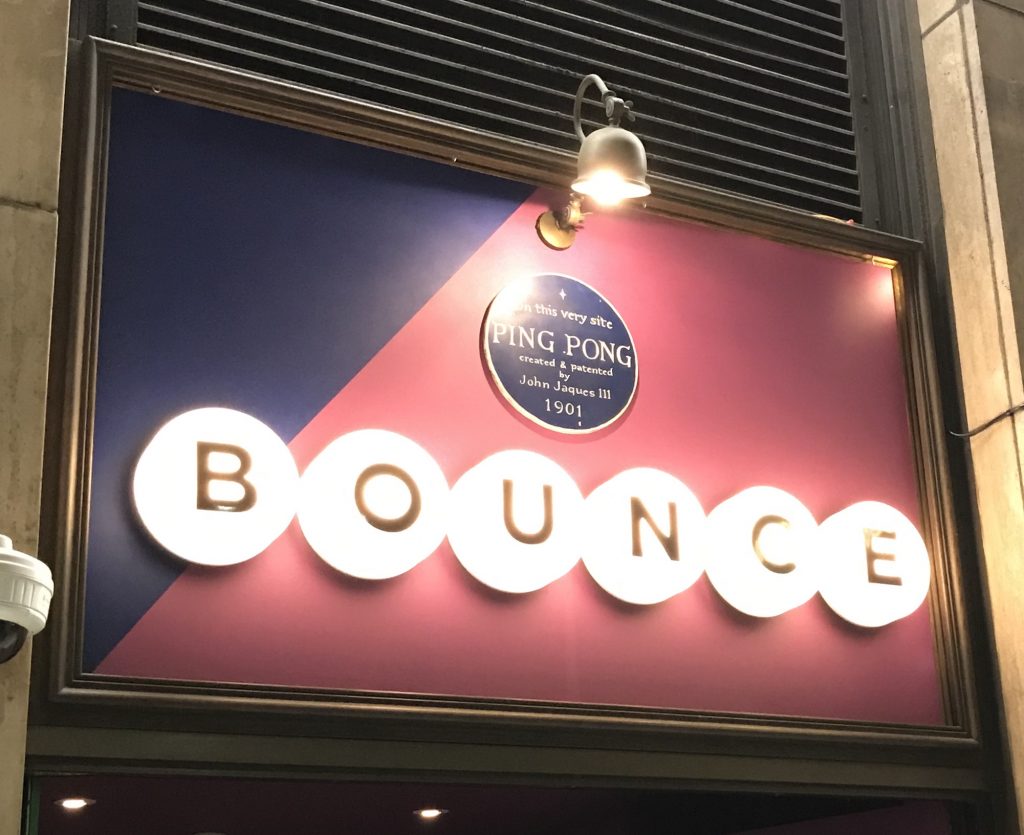 The Home of Ping Pong!

With a turnout of nearly 30 people, the team had a blast reconnecting and sharing food and drink while demonstrating a wide variety of levels of ping pong abilities. We also gave out some awards–mostly silly ones–to recognise the contribution of various members of the team. 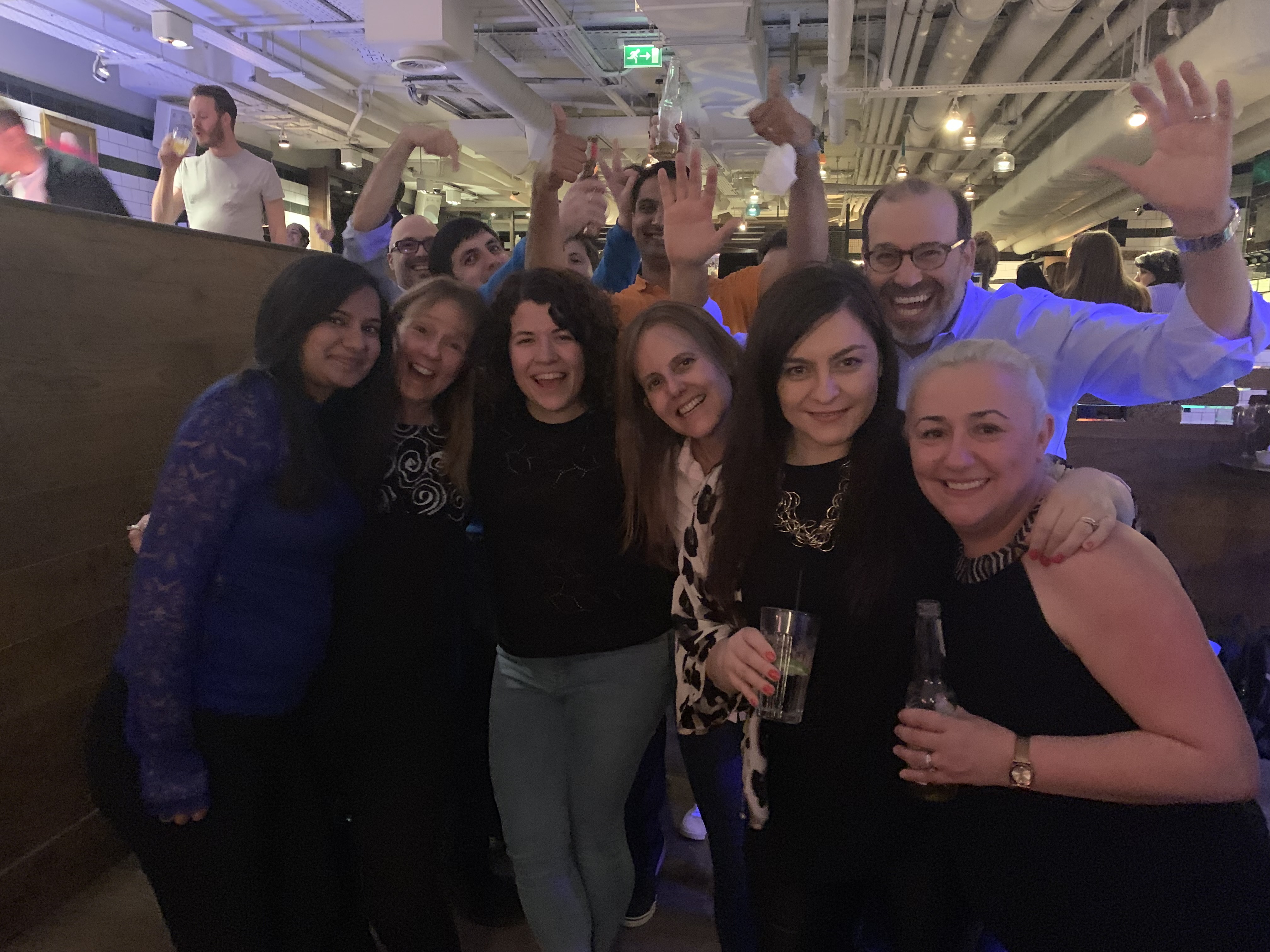 The World Tour was, as mentioned, a fantastic opportunity to see the Salesforce ecosystem up close. With almost 20 of our team in attendance, Sirenum was well represented. We wore our new black long-sleeve T’s for the first time and got a lot of compliments on the good look. 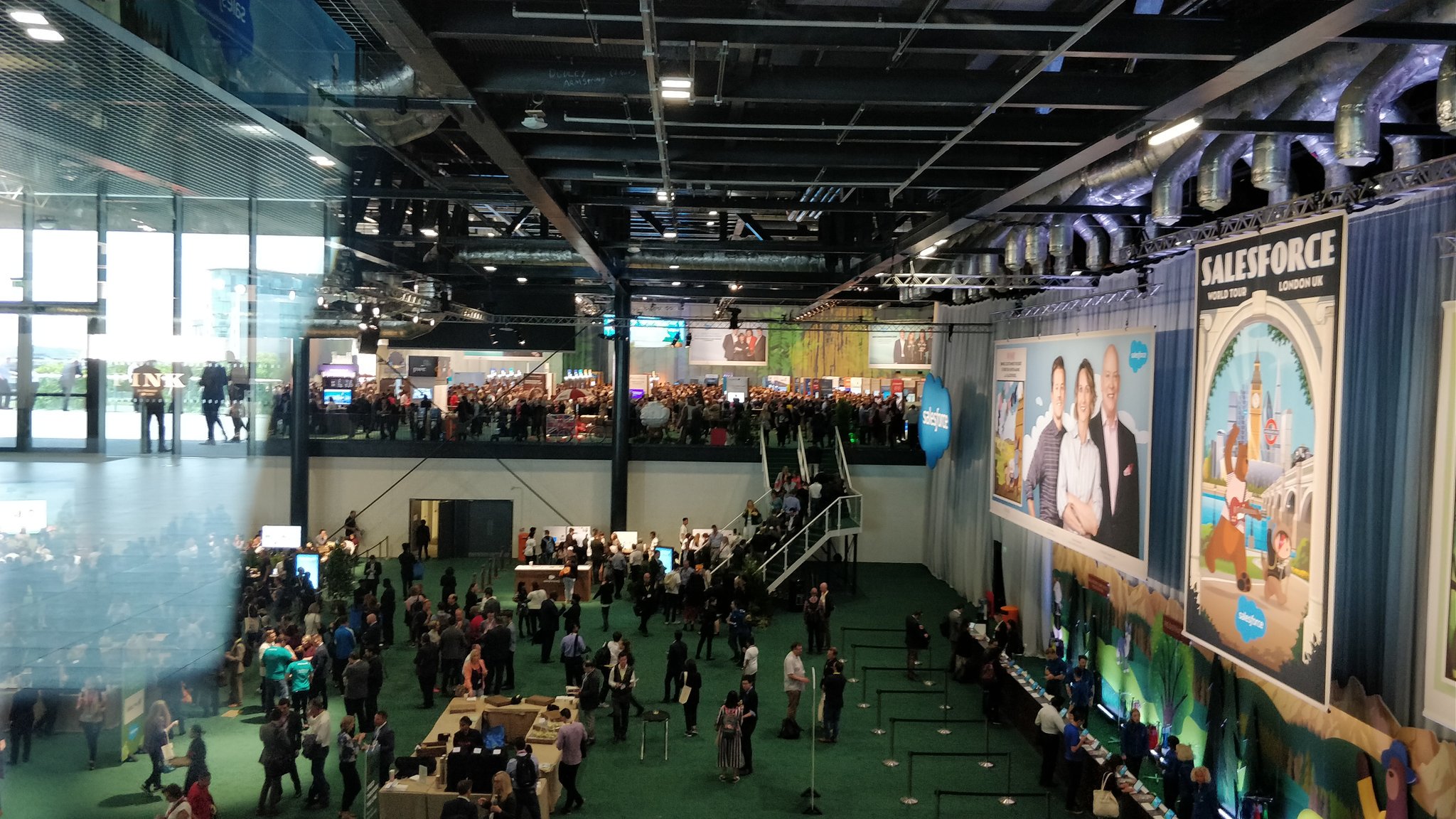 A View from Above at the Salesforce World Tour London 2019

However, perhaps the best thing to come out of the day at the ExCeL Centre was on our return home at the end of the day. The ExCeL is served by the Docklands Light Railway (DLR), a driverless public transport service whose platform staff is provided by a Sirenum client, ProActive Recruitment Services. Our new team shirts have a prominent Sirenum icon, which is what appears on the MySirenum icon on workers’ smartphones. At the end of a long day at the World Tour, as we walked down the stairs to board the train, one of the platform staff–Daniel–approached us excitedly, pointed at the icon, and said, “hey, that’s the app we use for work.” So we started a conversation, getting to know more about how Daniel uses MySirenum and what he likes about it. Choosing when and where to work, knowing his projected pay, and more. His enthusiasm was palpable and an excellent pick-me-up at the end of a long and tiring couple days. He summed it up, “it’s so easy, it makes my life easy.” Thanks, Daniel! 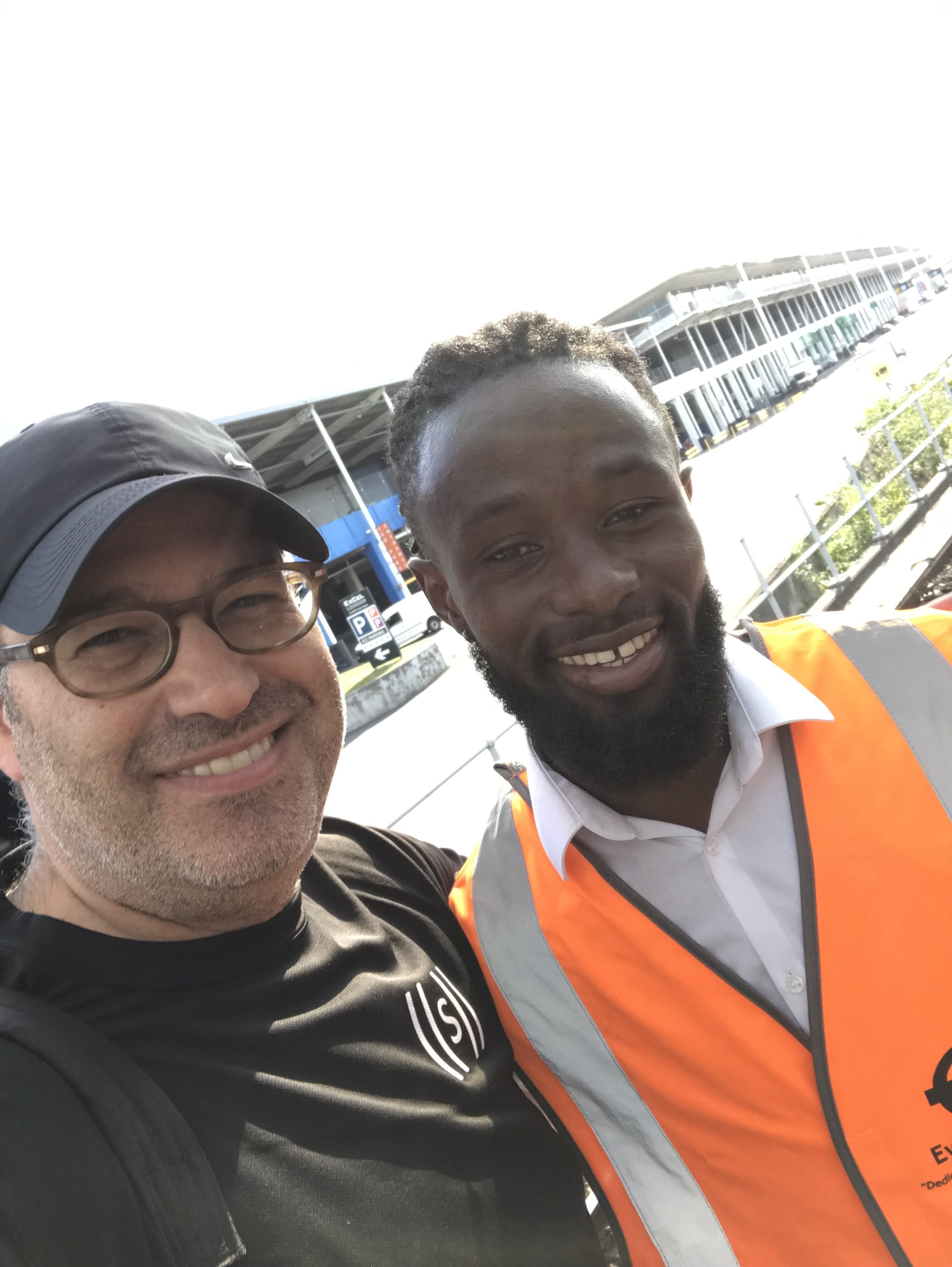 Yours Truly with a ProActive Employee

But while there was so much goodness over the past few days, what really made my week happened this morning. As I was just sitting down at my desk, my colleague Harpreet, who leads our internal recruiting efforts, and who left with a different Sirenum group from the World Tour, started excitedly sharing her story of meeting a Sirenum user on the DLR platform. Their conversation with Amin, who also works for ProActive, was almost a carbon copy of ours. Hearing the impact our product has on the lives of workers was particularly moving at the end of a long, draining week. It’s a great reminder of why we do what we do. 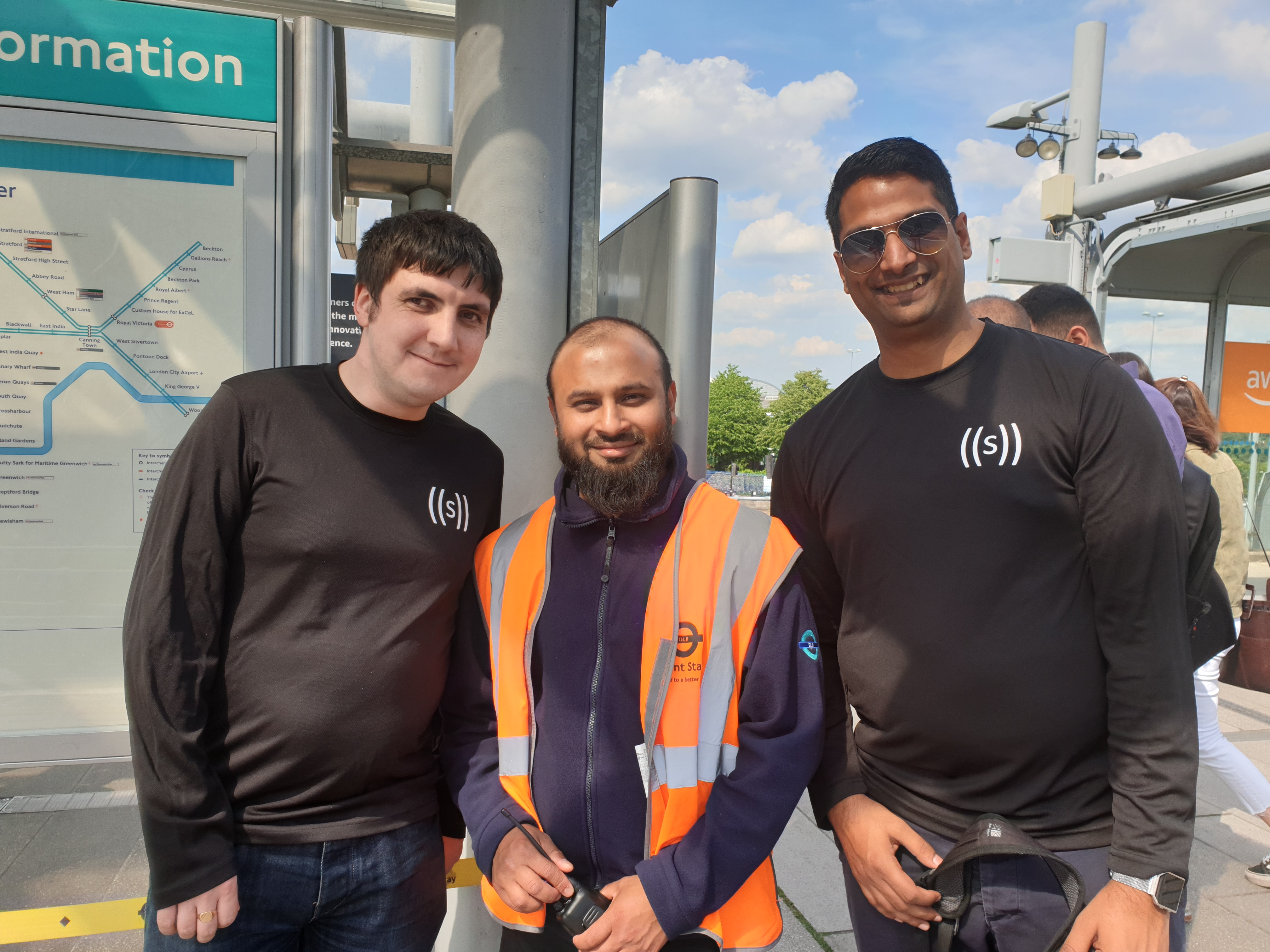 Sirenumites Kieran and Rishi with a ProActive employee