Dynamo Accelerator Wraps Up Week One

Dynamo Accelerator Wraps Up Week One

We here at Sirenum are extremely excited to be part of the inaugural cohort of teams in the brand new Dynamo accelerator in Chattanooga, TN. Today marks the end of the first full week of this accelerator whose goal is driving innovation into the transport and logistics industry. And what a first week it was, ending with news of a fantastic addition to the program. 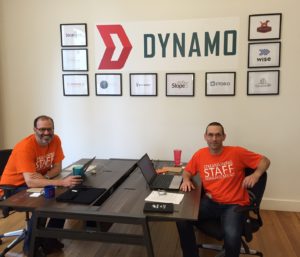 The accelerator was the brainchild of Ted Alling, Barry Large, and Allan Davis, the team behind the Chattanooga-based Lamp Post Group, civic leaders and local boys done good in this growing town of under 200,000 less than two hours from Atlanta. Chattanooga has a strong heritage as a logistics and transport hub dating back to the 19th century. The people behind Dynamo hope to reestablish “Nooga” as a key player in those industries and in technology more broadly, and they’ve built a top-notch extended team of partners such as GE Ventures and mentors like Gary Vaynerchuk.

One Good Thing Begets Another

Our participation in Dynamo is actually a direct result of our participation in the HackTrain accelerator in London earlier this year. One of the program’s mentors, Jon Bradford–arguably the leading startup guru in the British Isles–recommended we look into Dynamo after meeting with us in London. It was a grueling but enlightening interview and application process, which increased our interest level. Finally, just a few weeks ago, we found out that we made the cut along with a fantastic and fantastically diverse cohort of ten small businesses with representatives from Mexico, Ireland, the UK, and all around the US.

There’s still loads to learn, but if this week is any indication, there’s no doubt that our time here in Chattanooga will be dynamite. Onward and upward!