Why do dynamic workers need to be scheduled?

Home/Dynamic Workforce, Scheduling/Why do dynamic workers need to be scheduled?

Why do dynamic workers need to be scheduled?

When you work at a software startup, your friends and family often have a hard time understanding what you do. You get a lot of, “something with computers?” But when I joined forces with Benjamin Rubin as a co-founder of Sirenum, I figured one cool thing about working at Sirenum was that recruitment–as an industry–was not so esoteric as to confuse my friends when I described it–my family is another story! After all, anyone who has ever had a job or been a manager has likely been recruited or done some recruiting in their lives. And many would have worked with an outside agency to help with hiring.

So basically, I would tell my friends about Sirenum…and the blank stares about the need to schedule dynamic workers were impossible to ignore. Most seemed to just assume that people showed up when and where they were expected to show up and that was that. But if you’ve ever worked for or at a temp agency, or at a construction site, a hospital, or any of millions of other work sites where people don’t sit behind a desk, you know that it’s actually a lot harder than you think to get all the right people there on time. The stares get even blanker when I explain that most of these kinds of businesses don’t leverage modern technology to help with this challenge.

In fact, we at Sirenum even get blank stares from people who currently work at recruitment agencies. Of all places! But in a way it’s understandable because there’s a pretty clear delineation between the temp and perm parts of recruitment agencies, and most employees on the perm side, as well as anyone in sales on either side, are rarely concerned with the operations of their temp business. The silos in the industry are heavy duty. 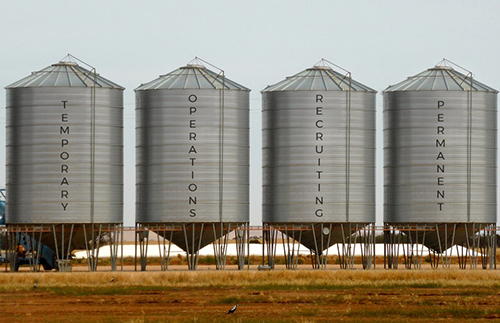 And so, whether those salespeople admit it or not, there are millions of temp workers, in every corner of the globe, who need to be scheduled. In the US alone there are over 11,000 temporary staffing agencies, according to the American Staffing Association. And right now, the vast majority are using whiteboards, spreadsheets, and notepads to figure out who goes where and when. It doesn’t take much thinking to realise that these are not the most efficient tools.

It’s interesting to see how people outside the industry don’t even realise that scheduling is necessary at first. But then they quickly come around to see that software should be there. However, agencies have their own built-in biases. So when we say scheduling to agencies–and corporations that manage dynamic workers–we are talking about leveraging advanced technology to schedule (and manage the schedules of) their workforce. It’s crucial to the success of any business reliant upon dynamic workers. And it’s why our mission hasn’t changed since Benjamin first leveraged modern workforce management technology in his own agency before founding Sirenum–to streamline the management of dynamic workers, putting the right person in the right place at the right time, even in the most complex situations.